A Tale of Three Tables

Terry returned a week later feeling substantially better in her shoulders and less pressure in her head. But her neck was still bothering her a lot.

Intuitively, I grasped that she needed more than Craniosacral Therapy, instead needing the Feldenkrais Method of Somatic Re-education.

As she lay on the Feldenkrais table and I turned her head, and it turned more easily to the right. Moreover, I felt the turning of her head was connected to her chest, torso and spine. When she turned her head to the left, it was stiffer, and functioned in a more isolated way.

I had her bend her right knee and stand on her right foot. Keeping her knee upright as she pushed off with her right foot, her pelvis turned to the left.

I then had her bend her left leg to the side and slide her bent left leg through the gap that was formed between her her right foot and right buttocks. As she rolled her pelvis to the left, I asked to reach down in the direction of the left foot with her right hand.

That’s because this is an experiential approach to learning, and can only be grasped or understood by sensing what is happening in your body as you are moving. Paying attention to how you are moving, attending to yourself, to your sensations and feelings.

What was I looking for?

I was looking for her to sense movement throughout her torso, spine and ribs, and to notice what her head was doing because it happened to be moving in a strange and stiff way. Not coordinating with the rest of what her torso was doing. Not turning and tilting to the right. But moving it independently, as if she were a Balinese dancer, laterally displacing her head. It was as if her head wasn’t connected to the rest of her body.

When we reproduced the above movements on the left side, she had trouble rolling her pelvis to the right, as if her pelvis didn’t know how to move in that direction. Also the ribs on her left side were much stiffer than on the right side.

By observing how she was moving, and providing feedback through my hands on her pelvis and ribs, slowly her body started to be able to coordinate the intended movement.

When she sat up and came to standing, she felt:
Her feet more fully on the ground.
Her shoulders were square.
Her chest was open.
Her head sat squarely on her shoulders.
Her neck wasn’t hurting.

Letting go of what I intended to do (a follow up Craniosacral Therapy session to our last successful session) and instead going with where she was at, yielded the best result possible that day.

By the way, she came up with the title for this blog post. The Three Tables title refers to the three modalities I use in my practice – Chiropractic, Craniosacral Therapy and the Feldenkrais Method. 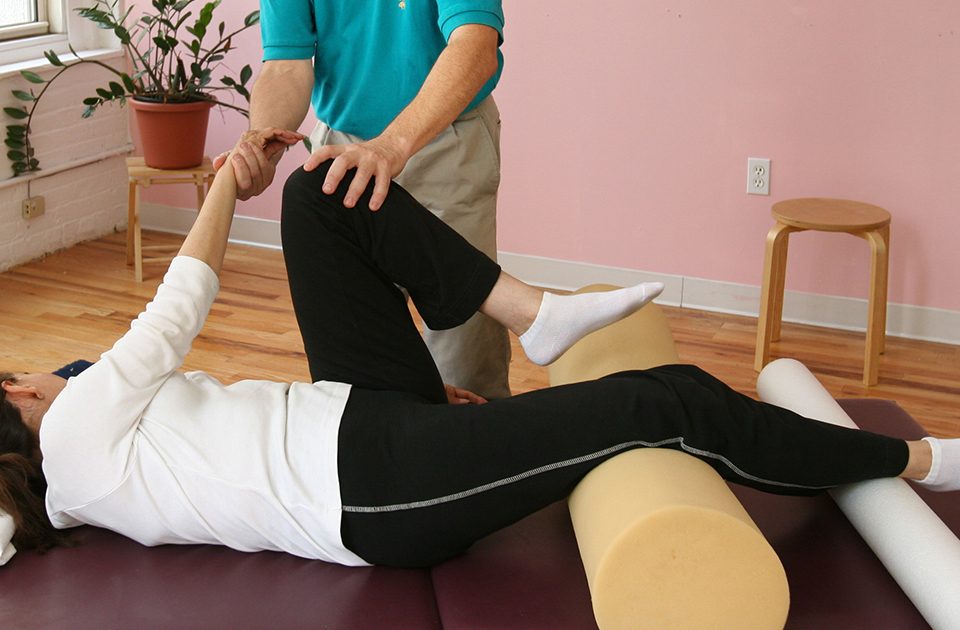